It has been three years since I last visited Vukovar. This time I arrived in summer, which made all the difference. Snow and autumn might seem romantic to some, but if you are to enjoy the weather, nature, and of course, gorgeous women in their summer outfit, May – August is the time to drop by.

So as you would expect (not!) a wealthy and excentric architect from Zagreb decides to build an extravagant, world-class night club in this little town completely ruined by civil war in 1991. They named it appropriately – Quo Vadis.

It didn’t take long until we got hooked up with the local crew and there you go – another Analogik rave. 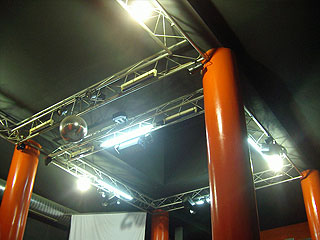 Last time we played in Vukovar it was in a little club owned by a friend. Back then ravers were hungry and thirsty of hard sound and overdue for a good dose of techno. I was a bit nervous about playing in my hometown again since we were targeting people from surrounding cities (Osijek and Vinkovci) which were just visited by Ken Ishii himself. In addition to that – Quo Vadis has’t had a true live techno performance so people didn’t know what to expect.

As always, I lacked a second person for my performance so my grandmother (yes you read it correctly) my grandmother finds one for me. Apparently a local photographer’s grandson had a “computer” and I needed to “show him how to use it” as “he was young and inexperienced”. So I say, what the hell, and go there to check it out. Rade had a laptop and was a DJ enthusiast – so what else could I ask for. We teamed up and worked out the set where I would be performing and mixing and him playing with the DJ mixer effects and loading holder tracks on Reason.

Apart from holidaying, next two weeks I spent polishing my live set, practicing keyboard/synth sequences as well as writing some new material. Local DJs (Tommy Sway and Richpe Inn) heard my stuff and commented with something like “why don’t you write techno instead?” which came to me as a bit of a surprise. I thought I did!

In-house gear was powerful enough and there was no need to hire any additional equipment including the lights. We did radio, newspapers and flyers – not a single poster! Interesting but it seems to have worked as the turnout was better than I ever expected. 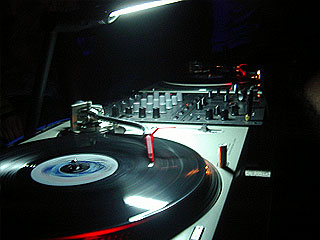 Tommy Sway hit it hard at the very start which wasn’t what we agreed. I had done my tracks in a ‘progressive hardening’ starting with ethno, tribal and tech and ending with harsh acid, techno and schranz. I had to fill an hour so taking tracks out wasn’t an option. We unleashed half of our hard stuff at the beginning, ethno and tech in the middle as some kind of intermezzo and did techno and schranz at the end. I can’t tell how it affected the overall experience but one was for sure – those guys were ecstatic once I started banging one of my pot and pan clapping tracks.

I’m still at Singapore airport, but when I get back to Brisbane I’ll analyse that track and see what the heck is going on. We played some really hard stuff that didn’t cause that many screams, yells and cheers among ravers. To my best memory the track everyone went nuts over was creatively called “004” as it was the fourth track I wrote in one night as a mindless banger for hard techno freaks.

My personal highlight was a newly written hard-ethno track with a disturbingly fat bass synth played live on MicroKorg. I slipped a few notes here and there; my fingers were sweaty throughout the whole performance. The biggest disappointment was my synth’s vocoder which just wasn’t appropriate for such a loud environment. I kept going with 004 for almost 15 minutes – god bless Reason.

Reason… reason for me to NEVER EVER pre-sequence anything. After about an hour of playing I got really tired, sweaty and thirsty and decided to end it during the climax. Suddenly I pressed the space bar and said “hvala narode”. Music got replaced by cheering, clapping and handshakes. Now that is the moment for which I’ll come back next year!