Dave McKinney, one of the founders of Rhibosome and a major songwriter and producer behind their debut album, has started a brand new electronic project called Flow Dynamics.

Flow Dynamics has already been attracting plenty of attention both in Australia, UK and Europe. To launch the new project, Dave has developed the Flow Dynamics website which is now up and rockin’.

Rewinding back to 1992, Dave was at uni studying marine biology, but after hearing mad stories of South America he travelled to Brasil for a year where the music, culture and energy completely blew his mind.

When Dave got home the music bug was itching so heavily he deferred his uni and jumped headlong into music. He started playing capoeira with Mestre Jorge (Samba de Roda) and eventually became a core member of traditional Brasilian percussion outfit Ogun Brasil playing Batucada, Pagode, Bossas and Afro Bloco.

Around this time, Dave was also getting right into samplers, drum machines, dj-ing, and anything electronic with a hint of soul or funk. By 1997 he had formed a full studio production team with Clayton Chipper called Rhibosome, and after writing a series of electronic soundtracks for live theatre shows, they soon morphed into a full band and hit the stage.

Since then, Rhibosome has played live shows all over Australia including supports for Coldcut, Rae & Christian, Faze Action, Norman Jay, Ashley Beedle, Jose Padilla, Wiseguys, Freestylers, Aphrodite, Groove Armada, Jamiroquai, Dj Shadow, Ozomatli, Roger Sanchez, & the Scratch Perverts, and at festivals like Vibes on a Summers Day, Gatecrasher, Breakfest, Ministry of Sound, Livid, Splendour in the Grass and the Big Day Out. 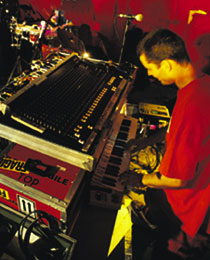 Chek out some of the tunes and find
out some more info:
Flow Dynamics Web Site