EXTRAORDINARY STORY OF THE TECHNO-NOMAD ADVENTURE

New York, NY September 13 — This October, Uncivilized World documents the amazing story of the most underground social revolution with the DVD release, World Traveller Adventures. From the 1990’s to present, several devoted artists of raving and free partying take to the roads through Bosnia, India and even Africa, as they cross geographical borders to export their music through political protest and/or cultural exchange.

Consisting of four exclusive films, World Traveller Adventures marks the first time this movement has been illustrated in images. The historic documents were compiled and filmed by the tribe members of this new genre. The films are: 23 Minute Warning — Spiral Tribe; Storming Sarajevo – Desert Storm; Mission To India – Sound Conspiracy; and African Expedisound – Tomahawk, IOT. 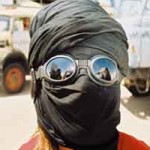 The world traveler adventure was born as a result of the U.K.’s illegalization of any gathering of more than 100 people accompanied by amplified music, which “includes sounds wholly or predominantly characterized by the emission of a succession of repetitive beats.” New Age travelers (an alternative movement of nomads), squatters encouraged by Thatcher’s repression to leave the cities, along with clubbers frustrated by the closure of clubs and early raves were driven to leave England. They traveled to the South American continent, Africa, Eastern Europe, the United States, Australia, Asia, among other countries, to spread their spirit of freedom and music, inspiring others to follow.

23 Minute Warning
The interviews in this documentary illustrate each person’s opposition within a militant movement using parties and music as a way to communicate a philosophical message. In the same way as the mythical label Underground Resistance, who saw music as a weapon to fight against the barriers between races, Spiral Tribe concentrates its creative energies around the rhythms of nature, music and dance, in reaction to society’s prevailing attitude. Also included are two unique Spiral Tribe video clips: “Forward the Revolution” and “Breach the Peace” in addition to archive images of the Teknival at Tarnos (’95) and Carcassonne (July ’93).

Storming Sarajevo – Desert Storm
Desert Storm could be defined as a peace-protest sound-system concerned initially with the Gulf War, and later the war in Bosnia. In 1994 (as a result of the Criminal Justice Act and Desert Storm’s difficulty to throw parties in the UK), they head in the direction of Sarajevo. Relentless snow and bitter cold delays them by three weeks and gets the better of their engines and gearboxes. Storming Sarajevo documents Desert Storm’s adventure as they carry foodstuffs, pens, books, medicine and condoms while they organize a New Year’s Eve party in Tusla and a party in a disco in Sarajevo. Desert Storm organizes a Street Parade, despite 70 cm of snow and temperatures hitting –10 degrees C. A policeman asks the organizers to turn the music up, but to dim the lights please –as the frontline is only 10 kilometers away!
Running time: 30 minutes

Mission To India – Sound Conspiracy
Mission to India is the most epic, the furthest-reaching and the longest mission of a European tribe. Filmed in 2001, this documentary tells the story of Sound Conspiracy, the reunion of three sound-systems: OQP, Total Resistance and Facom Unit who decide to set off the mythical Goa. Filmed by Paula of Sound Conspiracy, the documentary follows a travel log where the collective survived a fast, while crossing Iran, imposed armed escort through Pakistan where brutal robbers lurk, and heavy-handed checks by the omnipresent Turkish army in Kurdistan. They arrive exhausted in Goa at the end of November to organize several parties despite the undreamt-of local mafia implanted in this paradise of electronic music.
Running time: 45 Minutes

African Expedisound – Teknokrates, Tomahawk, IOT
African Expedisound follows three French sound-systems (Tomahawk, Teknokrates, and In/Out/True) as they set off for Africa in 5 converted French army lorries. A dozen people between the ages of 25 and 30 hit the road, with no institutional support, 15,000 km across Morocco, the Sahara desert, Senegal and Mali. Their mission is to find the initial rhythm, to understand the African myth, to live what they consider to be the ultimate quest for the ‘free’ generation brought up on BPM (?) The documentary begins in Senegal and the African Expedisound head toward Mali. Their experience take them through ramshackle routes, towering baobabs, and traditional villages under the baking sun. Local children announce the arrival of the “Whites” who have come to put on these “extraordinary, free parties.
Running time: 52 minutes

Bonus Features – Reclaim The Streets
Bonus features include a 4 minute musical documentary featuring images taken from the ’97 parties organized by Desert Storm in Sheffield, Bristol and Oxford. Musical and ecological activists, Reclaim The Streets (RTS) take the philosophy of the reappropriation of public space through cultural resistance to another level. They swept across the UK with street parties in Manchester, York and Oxford, and also appeared in cities like Tel-Aviv, Sydney, and Helsinki, among others.

About Uncivilized World
After being at the heart of the European cultural scene for 6 years, Uncivilized World became a record label with its finger well and truly on the pulse of quality cultural creativity. Its eclectic catalogue of artists includes the Nigerian Femi Kuti (afrobeat), the pioneering American DJ Jeff Mills (techno), the inimitable ‘French touch’ of The Hacker and Vitalic (electro), the DJing world champions of Birdy Nam Nam (hip hop), and the German big band Mardi Gras (jazz). The label has also joined forces with mk2, the biggest name in the French independent film industry, to create the Electronic Cinema collection of film soundtracks. Uncivilized World has also produced a series of music documentaries that have met with much acclaim at International film festivals: ‘Live At The Shrine’, shown at the Sundance festival and filmed at Fela Kuti’s celebrated Shrine venue, ‘World Traveller Adventures’, revealing the nomadic aspect of the techno adventure, ‘Biomechanik’, about the encounter between two different artistic universes when the sculptor HR Giger (the creator of Ridley Scott’s Alien) meets a hardcore DJ, and ‘Blue Potential’, a philharmonic concert filmed at the UNESCO world heritage listed Pont du Gard site. 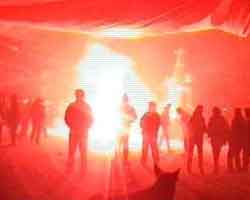