A couple of things that went wrong

Are you buying or upgrading your audio gear? Have a read to avoid some mistakes some of us have made during the upgrade time. Newly purchased equipment:

First recommendation is – do not buy C O M P A Q laptops.
There are a several reasons for this and I will go chronologically. First thing that was noticeable was the amount of noise that the machine was producing. This is not your typical fan/cpu/hdd/cd-rom noise but something to do with the grounding or isolation of electrical components. Amazingly it took several months to detect the source of this noise. It was a poorly manufactured power pack. It takes a little nudge on the unit to make it quiet again. My best guess is that it passes some electrical current/noise through the power plug at the back of the laptop irritating the sound card and the rest of the on-board components at the same time. The noise could be described as laptops stethoscope since it would let you hear the inner components ticking and would produce characteristic noises when CPU calculates something or you move the mouse across the screen. Very annoying.

Second recommendation is – don’t buy the extended warranty. It only kicks in after your regular warranty expires, and it means parting with your laptop for a long period of time. Same counts for the regular warranty – to be used you have to send them the whole machine. I decided to live with the occasional noise and forget about the issue. In a year or two it would be neccessary to buy a new machine anyway, otherwise it woudn’t be able to run the latest software. After all, the laptop was running fast (but hot). Centrino and light CPU variations at the time sounded too exotic and expensive.

It was summertime and the next thing that went wrong with the laptop was the worse thing imaginable – its hard disk. The unit suddenly stopped spinning causing permanent loss of data.

Third recommendation is – backup.
There is nothing more to say about that, you know it yourself. Eventually everything was back in place. OS restored, applications installed, some file and email loss had to be forgiven as the life goes on. There was no point using the warranty as it would require the laptop to travel to the manufacturer for assessment which could take many weeks if not months. It was also an opportunity to get a bigger hard drive (80 Gb).

The second hard drive had failed not too long after that. It’s a feeling that can hardly be described as you already go through a major agony when it happens for the first time. The faulty power pack has cost me two hard drives and a midi interface, which died due to the power surge on one of the USB ports.

Next recommendation is – get a mass storage backup device.
Maxtor one touch drive with plenty of gigs to spare will do just fine. There are network ready drives if you plan to collaborate or use it with your wireless network at home or office. The drive connects to your USB port and the direct transfer speed is acceptable. You might not want to swap movies over the WiFi network though. As a final thing to mention as I type this, I can see bottom-right part of my screen fading away into dead pixels. 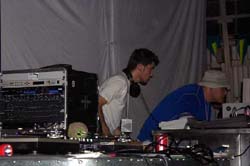 SPEAKERS
Behringer Truth Series are incredibly cheap in comparison to the quality of sound they offer and how they compare to the more expensive brands. One thing to keep in mind is the fluctuation in electrical current. These speakers seem to be very sensitive when it comes to switching all your equipment on at the same time or playing a gig with a huge equipment setup and unbalanced power outlets. You can tweak the fuse to be extra confident that there will be no annoying situations like that, however be careful as this might cause permanent damage to the speakers.

USB MIDI INTERFACE
Edirol is becoming more or less of a standard in MIDI interface market. You would expect something more robust from them. A simple USB power surge has rendered this device useless. It’s time to try the next brand. Analogik Reader Tips & Comments:
As to the noise on compaq lap tops, i’ve found that removing the ground with a “HumX” completely eliminates the noise…i only use it while recording because of the dangers of removing the ground …the HumX was only 70 dollars US look it up on internet and you’ll find who sells it. Thanks to Thomas Papadakos

In response to your article about Compaq laptops and their noisy power supplys, I completely agree with you. I solved the problem however by plugging the laptop power supply into a long extension cord. completely noise free now and safer than the non-grounding version.Thanks to Dean Thomas