When Analogik crew were just kids we all wondered about the future and what the world would be like in the 21 st century. Although flying cars are still in their most experimental stage, there is no teleportation or inter-stellar space travel, there are a few quite exciting things around that are gradually making their way into our lives. Some technologies have been on a slow evolutionary infiltration path and some… well, some have arrived with a bang!

Asimo is a robot. Its makers at Honda claim the inspiration came from the legendary fictional character Astroboy and its name is for AdvancedStep in Innovative MObility. Although officially denied, we would still like to think that his name comes from the father of The Three Laws of Robotics, visionary, prophet, and the greatest science fiction writer of our time – Mr Isaac Asimov. In order to be politically correct and in line with Mr. Asimov’s vision, one must refer to Asimo as ‘it’ and not ‘he’ or ‘she’ and when referring to its full name one shall use the following format: R. Asimo Honda (Where ‘R.’ stands for Robot).

Being only seven years old and 130 cm tall, R. Asimo has already seen more of this planet than most of us humans, capturing hearts of kids and attention of their parents. Its job is not a simple one, and certainly not one to be taken lightly. Being Honda’s mascot and a spokesman, R. Asimo must perform without failure. To ensure that things run smoothly Honda’s robotic representative has its very own support team who make sure his performance runs smoothly and step in case of an unlikely emergency (it happens to all professional performers at least in one stage in their career).

Kudos to Honda’s marketing team and companies’ initiative to use their cutting edge technology and invest a bit on a costly side project with no immediate commercial benefit. Quite frankly we expected something like this from Toyota – but they seem to have been blinded by their continuous commercial success and missed a great opportunity to represent their company by something as cool and awesome as a robot – a robot that features all advanced technology developed by one company in once small artificial being. 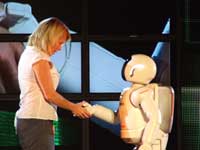 So how intelligent is R. Asimo really? At the beginning of the show, its human stage partner lists all the things R. Asimo can do – and one of them is ‘talk’. We found this to be a bit of a misleading statement. Asimo could probably be programmed to play a number of pre-recorded messages, also perhaps equipped with a text to speech mechanism or even made to generate its own responses based on dialog input; this is far from what the audience at the ASIMO HON DA show were made to believe. R. Asimo seemed to respond in a choreographed manner with a cued human voice message which has either been pre-recorded or spoken live by a human behind a microphone.

Nevertheless, R. Asimo’s motoric skills are highly impressive, starting from smooth motion, depth perception, motion recognition and coordination. Did we mention it can also walk at 2.7 km per hour and run at impressive 6km per hour without any evident difficulty (apart form battery life cost).

During the show R. Asimo was also asked to pick up a tray with a drink from a person and served it at the table on the opposite side of the stage, it kicked the football, shook hands, imitated person’s actions, danced and waved at the spectators. It is not clear whether these activities are voice generated or simply cued as part of the entire show choreography in form of a ‘play list’. One would like to believe that it is not the latter; however that would probably have to be a rather optimist view.

R. Asimo’s design is highly adequate for its purpose. Its motion is benign, shape, form and materials combined to create an image that is publicly loveable yet futuristic enough to touch the hearts of the techno lovers like yourself. We shall monitor the progress of Honda’s technology and hope that they release ASIMO V2.0 which could interact and converse. Maybe one day in our lifetime (ASIMO V10?) we witness something that can be described as sentient.

We are of opinion that Honda is following the right direction in development of clean fuel vehicles (hydrogen engine) and hope other manufacturers adopt similar concepts. Although the whole Honda show was woven with promotional messages in quite a cheesy show really, we were quite pleased with the whole picture looking at everything from ‘above’.

Just imagine a circus tent, ticket office painted in the vintage-style illustrated ASIMO with rays bursting in the background, posters, line-up of excited kids with their parents, holding hands. And inside? A first reasonably real-motion humanoid robot, having a ‘job’, representing a company. What a beautiful and almost romantic naïveté. The only thing that was missing was an announcer boy saying “Hoi, hoi, for one night only, a real, live, walking and talking robot – get your tickets at the box office – one night only! Ladies and gentlemen, welcome to the future!”