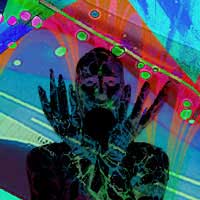 Ever since his first trip to London nightclub, Fabric, Mambo Freqs has been pushing his production skills to emulate the breakbeat he heard every week from the likes of the Plump DJs and the Stanton Warriors. With the recent boom in electro house, it only made sense to him to fuse the two…

7 years ago a kid called Dave stumbled across a free demo of Logic that only had basic MIDI functionality. After a few months of other kids laughing at his General Midi sound kits, he decided to take the plunge and buy a copy of Logic Audio! Three chillout ‘albums’ , a pair of decks and an obsession with vinyl later, he visited the London club Fabric for the first time. After witnessing the huge sound of breakbeat, there was only one way forward. It was time to dance!

A year later and Dave had his first release under the name Mambo Freqs, on the net label Virus B-23 with a remix of Deadman DJ’s Boasin Tone. Shortly after he founded Voodoo Freqs, a joint net label and online community. With artists such as Heretik, Dubsprung and Thrillabeats achieving amazing sales for such a small label, and even going on to be signed by larger labels such as Klaus Hill’s Fight Club, Mambo now knew that he wanted to help others get off the blocks and kick start their music careers.

Since then Voodoo Freqs has grown to incorporate an online radio station, featuring Mambo Frequencies, a mashup of all electronic styles – mixed on Ableton, every Sunday from 6-8pm along with many other artists playing all styles of music. His latest release ‘Was It Worth It?’, an emotionally charged electro breaks track with old skool influences, is now out in all major digital music stores.