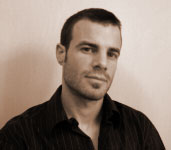 Intro: Finckh lives in Berlin, Germany. He has studied jazz trumpet, but got more and more involved in electronic music, mainly because of his studio work for Ras and Sonar Kollektiv / Jazzanova.

Finckh´s concept is to take the everyday sounds that surround us and make them dance. His musical roots span from some quite weird and funny tapes from his childhood to the real masters of funky music like JB, Herbie Hancock, Parliament/Funkadelic, Eddie Harris and Idris Muhammed. You could call his music “home made broken beats”.

Biography: Finckh was born in 1972 near Freiburg, Germany. He started playing the trumpet and studied the instrument in Berlin at the Hochschule für Musik “Hanns Eisler” with professors like Gerard Presencer and Jiggs Wigham. He switched over to producing and performing electronic music, mainly because of his studio work for RAS and Sonar Kollektiv/Jazzanova. As a trumpet player Finckh has been on tour/ in the studio with Seeed, Knorkator and many others. With the beginning of 2006, Finckh released a 12″ called “Aua Dieler” on the Berlin-based label Tonkind. Here, he follows his concept of taking the everyday-sounds that surround us – like the flooboards on “Aua Dieler” or the stones and mason-tool-sounds on “Stone Hop” – and make them dance. You could call his music “home-cooked broken beats”. Or call it what you like. As you know, most important thing is the GROOVE. And that´s why the biography stops right here