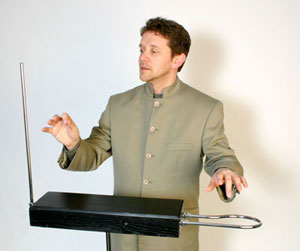 With his theremin, live electronics plus his exotic acoustic instruments and voice with special effects, Chris Conway is an astounding creator of unique atmospheric new and electronic music.

Hailing from Michigan USA, Chris Conway has built his music career in the UK, becoming one of the most fascinating musicians on the scene. As well as being an electronic musician, he also plays music in mnay other genres – singer-songwriting, world music, Celtic, new age, and jazz all make up Chris Conway’s musical world.

His huge and unique experience of different music genres, together with his skills on so many acoustic and electronic instruments is part of what makes Chris Conway’s music so special. The music just get inside your head – and stay there

Time Out Magazine of London said of him, “He purveys a lilting and melodic music of depth and emotion”

Chris Conway has released over 35 CDs under his own name or with his bands. His music has been heard on UK National and European TV, Radio, and film. His CD of relaxation music Ayurveda has sold over 10,000 copies worldwide.

So check out Chris Conway’s music and hear some extraordinary creativity and some beautiful music.