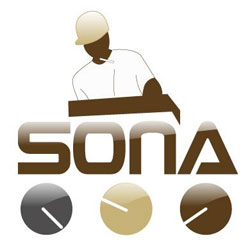 “Main influences are Fela Kuti, John Coltrane, Larry Heard, and Parliament Funkadelics. My music is unique because it incorporates sounds, old and new. You may hear some glitchy, techy riffs followed by a smooth jazz piano. My style is versatile and unpredictable.”

Being a classical violinist since childhood, Sona has always had a true passion and a great ear for high quality music. In just 6 short years, he has proven that he is on a sure path to success in the dance music world. His musical versatility has earned him production credits on MTV, and most recently FOX TV’s Nip/Tuck. Heavily influenced by a wide spectrum of musicians (John Coltrane, Fela Kuti, Masters at Work, Glenn Underground, Parliament, and Demarkus Lewis) Sona’s production can be deep and soul-soothing or incur rump-shakin dancefloor madness. His music has been charted by the likes of Johnny Fiasco, Ron Trent, and DJ Heather. His dj sets take you on a rollercoaster ride. Ranging from smooth, deep blends of house to techy, acid-jackin cuts, he never disappoints a crowd. Having already played alongside heavy hitters such as Diz Washington, Mr. V, Boo Williams, Ron Trent, Demarkus Lewis and Theo Parrish, Sona’s dj skills have taken him all over the US, Taiwan and Tokyo several times. He has also been featured in various magazines such as Esquire, Men’s UNO (Asia), and Underground United. With releases on Unified Records, Stupendous Music, and a feature on OM Records’ Winter Sessions, Sona shows no signs of slowing down and every sign of coming out on top.