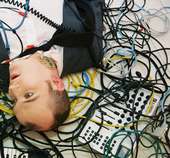 Corrugated Tunnel aka Edwin James has been making electronic music since the 90’s. Influenced from an early age by electro and computer generated noises which later became the acid/house sound that evolved in the 80’s.

Over the past three years Edwin has become one of the leading Irish players of the Live Irish Electronic scene through performing live whenever and whereever possible to get his sound heard by as many people as possible.

He has played live at home and abroad along side Abe Duque (Who refered to him as… ‘The new old school..’, the Hacker, Danny Legowelt and TLR. He has played d.e.a.f (dublin electronic arts festival) 04/05, New york in oct 05 and the undercurrent Sonar showcase in Barcelona June05. He headlined the Bodytonic/Pogo club NYE05 and his support set to the Hackers irish live debut raised his profile to a whole new level.

His Debut Album ”We Are Electronix’ has been released on seedyR + Invisible Agent records.

Edwin is currently working on new material, remixes for other artists / bands and will be playing at the Electric Picnic and in Paris in September ’06.