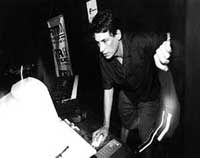 Audio Cephlon (aka Greg Lawrence) can best be described as an electronic musician fascinated with the technological future. His compositions, which journey through different genres, are gently bathed in futuristic atmospheres and synthetic melodies.
Influenced by the work of artists such as Arovane, Aphex Twin, Autechre, LFO, Future Sound of London, and local Perth acts such Sensory Overload and CSU, Audio Cephlon came into being in 1997 with the purchase of an Ensoniq Mirage sampler.

Audio Cephlon has also been recently interviewed on Triple J’s Soundlab program with his brother Brendan (Ele-mental) about Kieper Records. He has also performed at presented a panel on audio production at the 2004 National Sound Summit in Newcastle.

More recently, Audio Cephlon has been gaining a greater international profile by been released and gaining airplay on London-based radio station Resonance FM, as part of the Albino Radio Show (www.albinoradio.com) and having a debut EP net release on UK ambient label Kahvi

First released in 1998 on Divination Music’s Black Paradigm CD with his Calx track, it wasn’t until three years later that Audio Cephlon made a much greater impact on the Australian Electronica scene. In response to sending out a few demos, Sydney-based label Clan Alnalogue offered Audio Cephlon a spot on their locked groove vinyl release and its Clan Recordable compilation. Since then, Audio Cephlon has had a steady stream of releases.

“Audio Cephlon takes electronica back to its roots – good old fashioned mellow IDM with a sentimental edge with obvious influences such as boards of canada et al, audio cephlon creates complex rhythms and highly emotive melodies with a soft and padded feel.”

“Coming on like garbage era autechre, with the pairing of big synth washes and scatters of percussion, Audio Cephlon tread that uneasy edge between what was once known as chill-out and what now bears too much baggage to adequately describe (courtesy of the twin horns of new age blandness and allusions to intelligence). His tracks tracks emerge in a lovely, organic fashion such that they pass like a good train journey you arrive at the appointed destination feeling refreshed and somehow fulfilled, rather than lost, alone and drained of life.”

“Audio Cephlon who surprised many by opting for an almost orchestral ensemble of sounds. there was a feel to the epic to Audio Cephlon’s offering (which seemed possibly a little warp-label inspired). stylistically, the music mutated at a rapid rate, wandering from some crunchy percussive, slightly house experimental moments to mid tempo bit crushing outings. Definitely interesting, Audio Cephlon’s output evolved into an industrial inspired adventure, thanks to a few noise artist elements that truly built up the intensity of the mix. As a complete unit, this set really worked the listener through a whole range of differing moods, from the mellower opening to the almost anarchic closing moments.”

“Fans of Black Dog, Autechre, Machine Paisley and the like will love Audio Cephlon.
atmospheric acid ambient synths soar & simmer over quirky, crunchy beats, that are influenced by jungle, trip-hop and drum & bass.This is a sonic meeting of organics and mechanics.”

“Audio Cephlon manages to combine funky and innovative sounds with a musical sensibility that seems firmly based in the old school dance scene – music that is unique, catchy and danceable but not in the standard and often boring club-orientated way.”