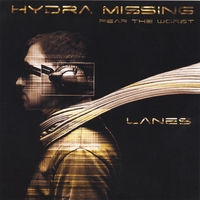 1.Artist : I am an independent electronic music composer / programmer / producer / sound designer / studio performer , a DIY from the very beginning to the very end . I have managed to start my own direction and develop my trademark sound which is easy to recognize after first few seconds of listening to my music .My creative potential is promising due to the ability to constantly find new harmonies in ordinary environment and see beyond traditional textures of genre . I don’t wait for an inspiration to come , I am actively looking for it myself and I know where to look .

2. Music : in my own words , it is hard atmo-electronica due to clear presense of hard drum/bass parts , atmospheric backgrounds and electronic leads and pads . What definitely puts my sound aside from overwhelming majority of existing electronic records is the emotional content which is expressed by pronounced leads designed to deliver it to the listener and to take him on emotional trip , lifting him up and throwing him back down but never letting go .This is the hook and according to my fans it keeps attention and makes them wanna fly . This music is busy , it is big and enveloping , it has builds and breakdowns and it has a substance . It is far from mechanical , free of annoying repeats and cliche’d pre-recorded samples , all sound effects are consistent and in place and serve to intensify the emotional impact at their particular moment . Another funny thing I have noticed , this kind of sound gets interpreted differently by different listeners and evokes different emotions . Contrary to songs with vocal where intended emotion is brought up mostly by the content defined by words and is limited in scope , with instrumental composition the pattern wakes a whole range of reactions hence more people can dig it and more people can become attracted to it . I was told much more than once things like” I’m not really into electronica but I love your sound ” . I am not bragging but I was very happy to know I managed to attract attention to the genre in general and my sound in particular .

3 . Discography : 1. Smoke & Mirrors LP , 2005 : 13 tracks from uptempo progressive to midtempo deep house to downbeat illbient . Picked up by KUCR Radio ( University of California ) immediately after release , airplayed for 6 month in a row , reviewed on kucr.org by MD Walter Douglas , awarded 1st place in KUCR’s Top 10 albums of 2005 .Airplayed by WPRB ( University of Princeton ) during spring of 2005 ( Transitional Soundscapes ) .Currently on sale by iTunes and 15 other major online stores . 2. Hydra Missing . Fear The Worst LP , 2006 : 13 tracks , also different in tempo but more emotionally charged FM – based electronica with ambient and techno elements . Already reviewed by Northeast In-Tune Magazine , high marks . Album is to be placed on the same online stores as the debut , already requested by a number of Radiostations across the country ( including KUCR ,WZBC , XTRA , KSCR , KFAI , etc ) , asked to be reviewed by Release Magazine in Sweden and Igneous Music at home and is already being submitted to TV / film/videogame industry listings .

4. What do I want and why am I sure I will do it : I want to reestablish the reputation of Electronic Music as a stand-alone genre with unlimited musical potential and not some ” Dance/DJ/other ” category by releasing quality LPs once a year and going full length promoting it using all money that I have . I don’t have any doubts in success of my project cos I am a perfectionist by nature , I never quit , my inspirational sources will keep growing and I have a plan to follow .