The idea for this design came out of a late night coffee with Dejan whilst listening to jazz.

The concept of a little seed coming up out of ground was agreed upon and I went straight home to start designing the seedling. It is obviously influence by Autechre’s Gantz Graf and clean modern vector styles but visually I wanted to push the contrast of heavy ‘harmonic distortion’ on a tiny little organic plant. Almost as if the plants DNA was being modified by sonic pulses.

The distortion map is created in after effects using ‘audio spectrum’ where a 16:9 map of the soundtrack was rendered (which was to become the base of all vector movements). To create harder and softer distortions on the plant the audio file was then filtered so that high frequencies would be the physical distortion on the plant and low frequencies would be the shake movement. After the seedling was satisfactorily distorted the camera move was exported in RLA so that the vector overlays could be matched. The overlays were to reflect a sort of monitoring system of the amount of audio and the plants distortions.

The audio sphere (or bass ball) is created out of the same audio map but traced around a 3d sphere (‘alpha infection’) and then treated in after effects to produce a glowing, pulsating ball which is wrapped around the plant.

Need a player for QuickTime files? 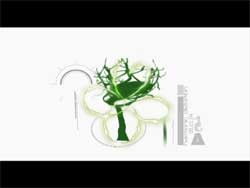 Doing a soundtrack for this piece was a bit of a challenge. The coffee-table idea bounced off our heads and we both had the same, yet different mental picture of how this animation should look like.

So it started with sound. Knowing Brad’s recent influences in music I’ve decided to go with the most unpleasant and distorted option I had up my sleave Malstrom synthesizer served me well in this case. And so I started.

First thing I had to visualise was the sound, a void would make just before the seed comes out. For this I used a very deep bass in Subtractor Synth. I had all sorts of ideas in my head but they would all take a very long time to implement, especially for this experimental piece.

The idea in a form of a track bounced off couple of more times until we’ve polished it to our liking. At the same time Brad was constructing his little 3D world, and at some point it all seem to have merged into one. In our case it was very hard to tell which one should have been done first – sound or the animation so they were done simultaneously.

Here is the source track in Propellerhead Reason | video file: harmonic_distortions.mov – (Right Click – Save As… )