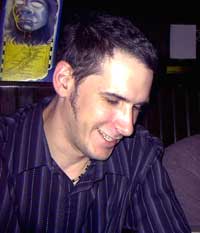 Biography: Kyle began DJing in 1993 in Cincinnati, Ohio at an Industrial club simply called The Warehouse. In 1994 he moved to WZMB radio station where he established the Industrial hour. Steeped in the Industrial and Techno of the 80s and 90s he has been at home in electronic music for over 10 years. Migrating from the industrial dance scene of the early 90s onto the Trance and House scene in early 1996 he began working with the various forms of new dance music he was exposed to, pushing the envelope of what he could do with the fusion of the music in these areas. Kyle has been playing at small gatherings, large parties, venues, and major clubs in the Carolinas and across the southeast for almost a decade. Kyle now resides in Atlanta, Georgia where he continues to innovate, educate, and motivate others to keep movin’.