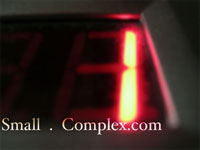 What does anything mean? Basically.
Not only is the question a title from a Chameleons’ album, it’s a very apt question to ask ourselves in this day and age. It is a question that distinctly comes to mind when you hear Small Dot Complex. The answer, when applied to Small Dot Complex, is better left to the individual listener, who is preferably listening with headphones. In this regard, art is imitating life.

What was:
I have always been into music in various capacities in my life, but it wasn’t until I got my first analog 4-track that I got serious about creating the sounds that were buzzing in my head. Rather than bore you with a laundry list of all my influences,
I’ll direct your attention to the resources page on this site.

In 1997, The Sleeping Pill was born. Utilizing a cheesy Yamaha keyboard, a drum machine, a guitar, and a 4-track, The Sleeping Pill was an experiment to see if I had what it took to communicate my thoughts in the form of music. The named changed to In Search of Sleep shortly after writing material for the first cd. When it was released, I realized I might be on to something despite the primitive sound I was creating. In Search of Sleep lasted 3 years. Real life intrusions brought the project to a close.

In 2001, I was introduced to an easy to use sequencer/synth application called Reason. I wasn’t very impressed at first, looking back I was probably too scared to try music again, but after trying out the software from an acquaintance, I started realizing that this program was doing what could not be done in 1997. Inspiration
struck again as I was on my way to attempting more music. Small Dot Complex was born.

What is:
2006 marks an incredible year for Small Dot Complex as I have realized my capabilities and have gained a new confidence in music. Regardless of the mainstream trends, my mission is to create music that the listener must engage. The reward for the efforts will vary depending upon the personalities of the listeners but it is my belief that it will be a fulfilling experience. This fourth release marks a point of access as well as a point of departure. I am
not content to recreate the same thing release after release. I am always looking for ways to change.

What will be:
Who knows? Only time will tell what direction Small Dot Complex goes in from here. It’s a big, vast musical landscape out there. And after all, what does anything mean? Basically.